Born in the region of the present-day Czech Republic in 1860, Alphonse Mucha was a celebrated leader of the Art Nouveau movement and a prolific artist who produced paintings, advertisements, illustrations, and designs for the decorative arts arena. Known primarily for his beautiful images of women, Mucha is also noted for his works that featured the legendary theatre actress Sarah Bernhardt. His poster art obtained mass acclaim for his work, but he tirelessly looked for artistic avenues to elevate his art and, through it, his homeland. 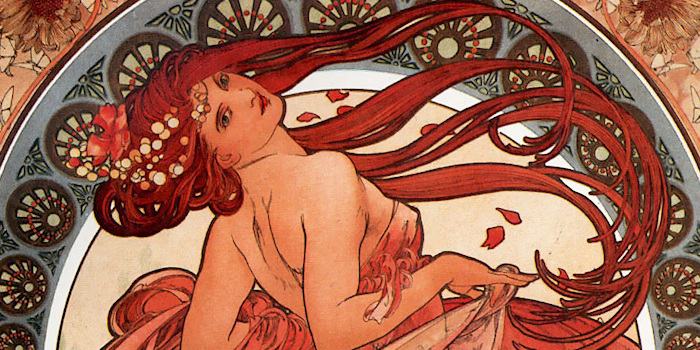 Mucha’s early years were spent in Moravia where he obtained work as a painter for the theatre. His talent led him to Vienna in 1879 where he was able to afford more schooling by working for a Viennese theatre design company. After a stint at the Munich Academy of Fine Arts, Mucha found himself in Paris by 1887. A chance opportunity allowed him to create a poster that would advertise the play Gismonda that starred Sarah Bernhardt. Not only would this poster please the star who modeled for Mucha on subsequent posters, it would launch his sensational career.

Mucha was pleased that his critical acclaim meant that the arts and crafts movement would share in his glory. The artist also believed that his work reflected a Czech aesthetic. After Czechoslovakia emerged as an independent nation from WWI, Mucha designed many government items such as postage stamps and banknotes. Married in 1906, Mucha had two children and raised his family in Prague where he also designed for the city. The St. Vitus Cathedral showcases the famed Mucha window that he designed in the 1930s. Mucha died in 1939 having contracted pneumonia after an arrest by German Gestapo. His health never recovered, despite his release, after this German invasion of his country.

Mucha believed his best works were the twenty paintings that made up his Slav Epic, paintings that depict the history of his homeland. The world reveres Mucha for his Bernhardt works as well as the many women he featured in seasonal settings beset with flowers. His graphical portfolio includes the famous Job posters of 1896 and 1898 as well as the 1899 poster for Moet and Chandon. The artist also spent time in America when he left Paris at the height of his popularity. He is considered today as one of the greatest artists of the Art Nouveau period.